How D2C Streaming Can Win the Content Arms Race

By this point in the streaming wars, it’s clear that content is one of the largest investments streaming companies are making. However, it is not sufficient to simply invest primarily in content. For direct to consumer companies looking to win in the attention economy, you must develop a strategy that provides consumers not only with compelling content, but with a differentiated experience.

Why is it challenging to compete on content alone? The answer lies in understanding content beyond the bounds of the traditional media landscape. To understand the strategic role of content investment in the pursuit of consumer attention, streaming competitors should consider it in regard to these four dimensions: ability to invest, quality, quantity and price.

Apple and Amazon, the two most valuable players in the streaming sector, can outspend the competition with little impact on their ability to run their core businesses. In 2019 they invested $6B each on content alone—more than every one of their competitors combined. They can place many different content bets, knowing some will be flops and some will become hits like The Morning Show and Fleabag, which lock consumers into the product ecosystems that generate the majority of their revenue. This ability to create value from the huge, lucrative non-streaming segments of their businesses gives them a major advantage over any competitor trying to compete on the basis of content alone.

Owners of existing platforms and devices also have huge advantages in scale and access. There are 1.5B active Apple devices in the world, which provide both a seamless audience access point for AppleTV+ and the opportunity to leverage access to customer data for strategic investment and development. AT&T is counting on a similar dynamic with its new streaming platform HBO Max, recently announcing that video streamed through the service will not count against users’ data limits. By attracting new mobile subscribers and reducing churn, the move could generate billions.

HBO is a perennial and undisputed innovator when it comes to quality content. Because it is supported by subscribers rather than advertisers, it can create some of the most boundary-pushing, unique and innovative content in the history of media companies. The approach has resulted in HBO winning an outsized number of Emmys nearly every year, a strong indicator of its ability to consistently and successfully navigate the risky business of creating great content. The challenge, however, is that HBO’s content appeals to a relatively small potential audience, and an even smaller segment of that potential audience is willing to pay the subscription fee for the service. They have the highest quality content, but even with huge hits like Game of Thrones, they don’t have the scale of audience or engagement to dominate the attention economy.

Netflix has taken a different approach, instead positioning itself as the industry leader in content quantity. As a percentage of its overall budget, Netflix spends more on content than any of its streaming rivals, and it has increased its content budget 35% year-over-year since 2015. While Netflix does have some HBO-quality tent poles such as Stranger Things, they’ve remained invested in quantity over quality. Why? Because when media companies move to develop their own D2C models, Netflix loses access to their catalogs. They fill the gap with their own broad catalog of content, designed to appeal to the largest, most diverse global audience possible. With 183M global subscribers and a $158B market cap, the strategy appeals to consumers and Wall Street alike.

Many streaming services built by existing tech companies can essentially offer content for free: Amazon Prime Video is included for free with every Prime membership, and Apple offers a free year of AppleTV+ to new iPhone users. As described above, they can afford these free bundling offers because they lock users into their sphere of more lucrative products and services. Streaming competitors without these supporting ecosystems can’t underwrite costs in the same way.

With the rise of Attention Challengers in social media and gaming, however, all streaming services have been forced to reckon with a powerful economic fact: it’s hard to compete with free. Social media content platforms like YouTube, TikTok and Instagram all provide free and virtually infinite streams of user-generated content, which both boosts user engagement and costs the companies nothing to produce. Instead of investing in content production, these social media companies have invested in technology—like algorithms for identifying and curating the best content or helping brands target users in sophisticated ways. While these business models are similar to classic TV business models in that they rely on advertisers, their reach and scale are much larger and their distribution costs far lower than anything in traditional media.

Finally, “Freemium” Attention Challengers like Fortnite push the price-to-value ratio even further. Players can play Fortnite for free on nearly any device or console, enabling a massive global user base. Monetization occurs through in-game purchases and add-ons such as character skins, custom outfits and emotes (in-game gestures and dances). These add-ons tap into players’ emotional desire for self-expression and creativity, allowing them to be whoever and whatever they want in virtual space. 70% of Fortnite’s 250M users have made in-game purchases averaging $85 each, illustrating again the power of experience differentiation in the attention economy.

We’re now living in the golden age of content and entertainment. Between streaming, gaming and social media, consumers have never had so many options. While the content arms race and streaming competition has fueled the fires of the Attention Economy, it has also made one-dimensional investments in content less and less efficient in the fight to win a space in consumers’ media diet. With Attention Challengers continuously expanding the boundaries of digital experiences, streaming video providers have no choice but to think beyond content and to boldly invest in experience differentiation. 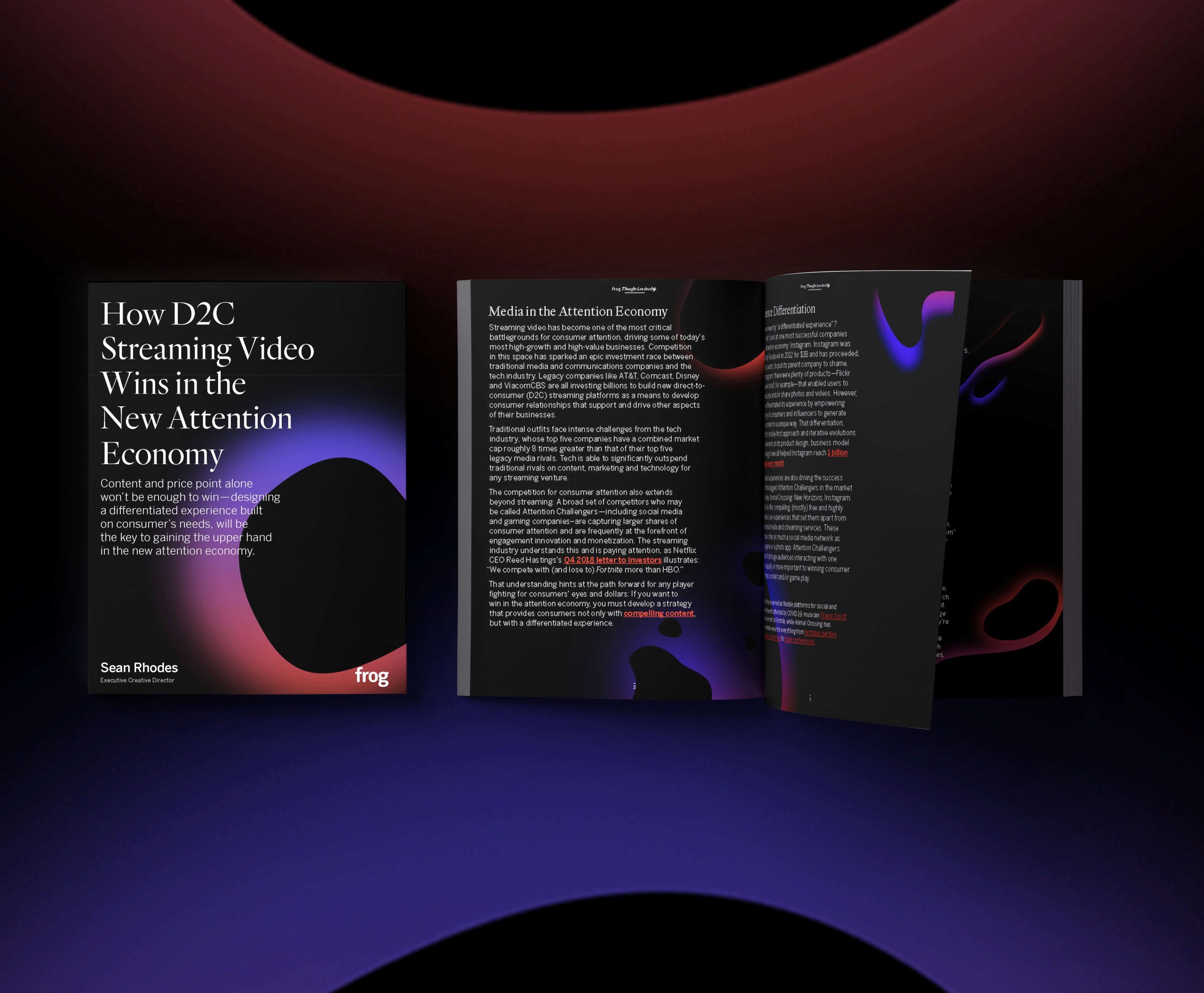 Sean Rhodes is a leader with a passionate belief in the power of design, technology and business to shape the world we want to live in. His focus has been building world-class teams and environments for multi-disciplinary collaboration that delivers creativity and productivity for product and service design.