On July the 19th frog Milan hosted a hackathon calling all coders who would like to work on the cutting edge of design and technology.
BY ALEX CONCONI & LAURA LICARI — FROG

As a designer (Laura L.) and a computer scientist (Alex) at frog, we often discuss the opportunities we encounter to bring the tech and design communities together by creating a collaborative, hands-on experience under the flag of creativity and innovation. After several successful design events hosted by the frog Milan studio — such as the World Information Architecture Day, the Milan Design Week open day, and the Creative Mornings chapters — we thought it was finally time to experiment with a cross disciplinary event.

We decided to embrace the hackathon format and giving it a “frog twist” – an offer to developers to experience frog’s unique process by providing them with intensive mentorship and guidance on UX, design, and technology, and creating hybrid teams in which designers and technologists can work side by side. 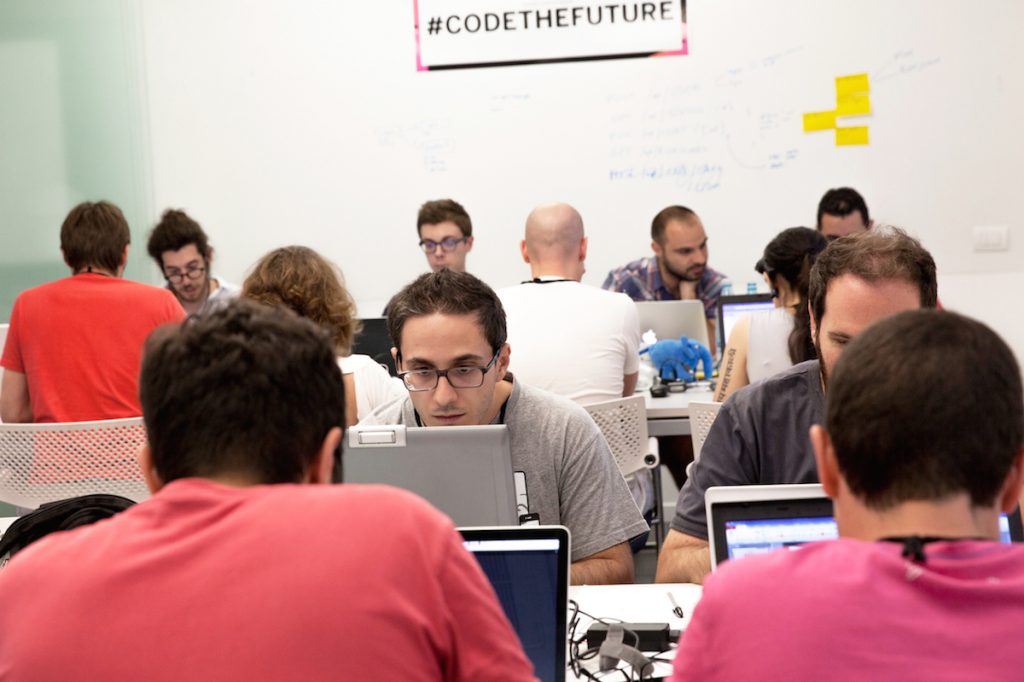 In the morning, the participants were asked to pitch an idea that they would work on during the day. After a round of discussions facilitated by frog, teams formed spontaneously, but based on common interests in a topic or a development platform. Each team was assigned one or more frog mentors, who provided guidance in refining the value proposition and setting up a plan to make sure that by the end of the day each team would be able to explain the big picture, as well as present a working demo. With keyboards ignited, ideas started to take form, one line of code at a time. 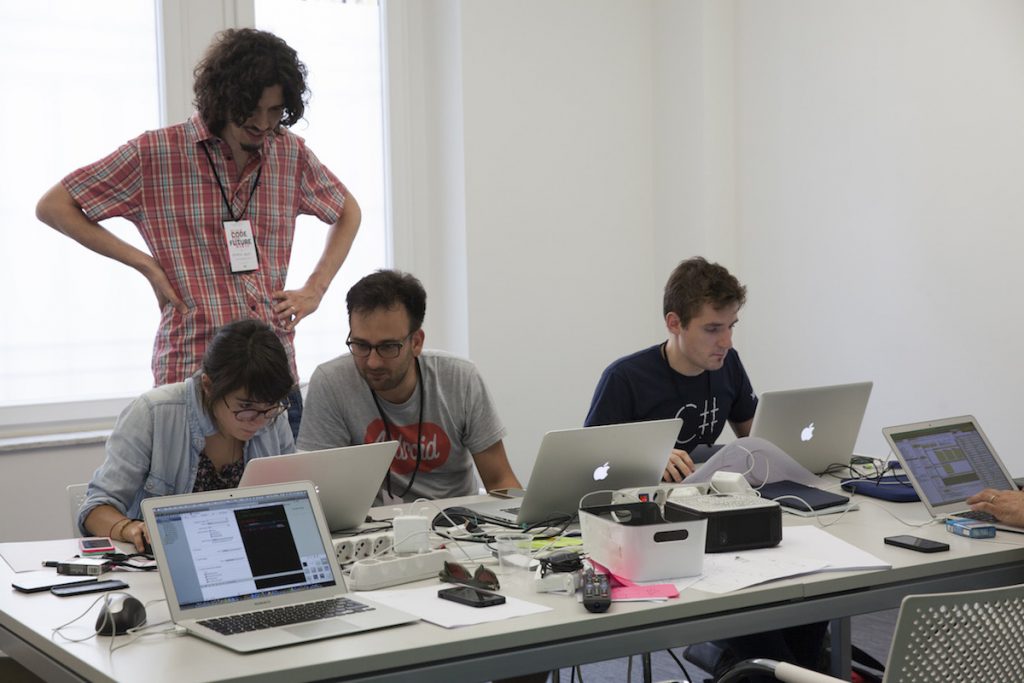 The hackathon was platform-agnostic, and it attracted developers with varied expertise. It was interesting to see a broad variety of technologies — spanning iOS, Android, Arduino and the Web– being integrated together. 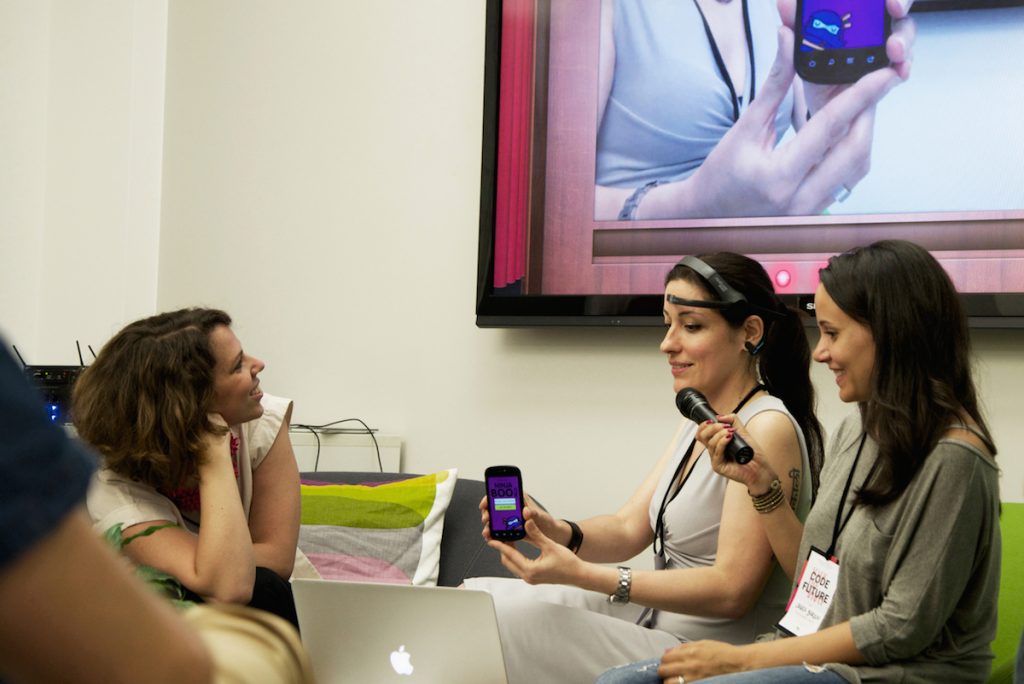 In the evening, frog hosted a public session: the teams presented their work to the guests and the jury, composed by Thomas Sutton (Executive Creative Director), Matteo Penzo (Technology Director), Andreas Markdalen (Principal Design Director) from the frog Milan studio, and Maurizio Garbarino (Co-founder and Head of Research) from Empatica.

inPlace (Francesco Volonterio and Gianluca Zanini) demoed an iOS and web based solution that leverages the iBeacon technology to provide an interactive, bespoke experience to museum visitors.

Marketplace (Claudio Corridore, Giuseppe Gaeta, Igino Pennino, and Filippo Machi) created a simulation of an ecommerce platform that creatively suggests to the user how to spend his money.

NinjaBoo (Fiorenza Tomea, Alfredo Morresi, and Christian Nastasi) assembled a demo of an Android-based multiplayer game that integrates a Mindwave headset (wearable EEG sensor), a smart watch, a mobile phone and a PHP back-end to explore the potential of physical proximity and multimodality to create a novel game experience 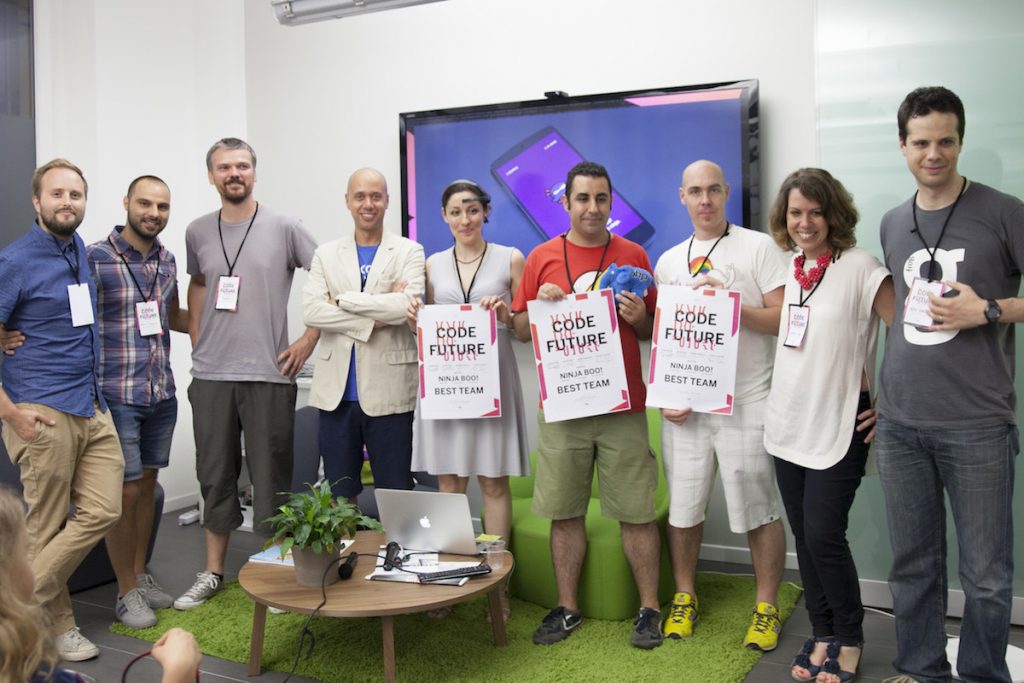 The jury awarded NinjaBoo as best team, acknowledging the originality of the concept, the multidisciplinary approach and the smooth integration of multiple touch points.

The team has been invited to spend a week at frog to further develop the concept and benefit from our mentorship.

The atmosphere of the hackathon was lively, but composed; participants and frogs enjoyed the collaborative mood and the open discussions. Our biggest accomplishment was to demonstrate that everybody can be creative if the right conditions are set. With proper guidance, a group of strangers can become a team and accomplish a lot together, even in a matter of hours. People with very different skills can work in synergy and bring equally valuable contributions to the development of ideas and solutions.

The mix of unique backgrounds is at the root of our culture, and we are glad that we could let the participants experience it for a day.

Alex is a Technology Director in frog’s Milan studio, where he helps clients turn ideas into real products and services. As a computer scientist, his passion lies at the intersection of technology and culture.