The Universal Score: how to push inclusive ideas through the product funnel

There are still too many products and services that exclude people from an experience because of their ability, situation or context. At Idean, we believe that it shouldn’t have to be like this. That inclusive design should be the default from day one.

We wanted to solve this, so we’ve found a way to evaluate our ideas early on and find out how inclusive they are to help push them through the funnel.

The journey of the emoji

This isn’t a new problem. Let’s take emojis as an example.

When Apple first launched their emoji library in 2011, they were heavily criticized for its lack of diversity (and rightly so). One year later and they introduced same sex couple emojis.

It took a further three years before they introduced skin colour options for Black, Asian and minority ethnic groups, and female representation in professions such as medicine or engineering.

By 2017 it was easier for some users to express themselves with greater diversity. But how long do you think a disabled person had to wait for representation in the emoji world? 8 years. And they weren’t the only ones; cultural emojis, for example different cuisines, remained heavily westernised until 2018. And a gender-neutral emoji wasn’t available until 2019.

To put that into context, that’s two years after Google’s CEO said he would drop everything to prioritise where to position the cheese in the burger emoji. And one year after Apple promised to address the incredibly urgent issue of a lack of cream cheese in the bagel emoji #Bagelgate.

Emojis represent a lot of human choices and constant decision making, and that’s always happening in a cultural context. In this example, the needs of those who were not represented in the decision making process were clearly de-prioritised. The outcome was a feeling of exclusion for millions.

The digital divide in times of COVID-19

Let’s take a look at the response to COVID-19, another recent example of how millions of people have been excluded from the decision-making process. 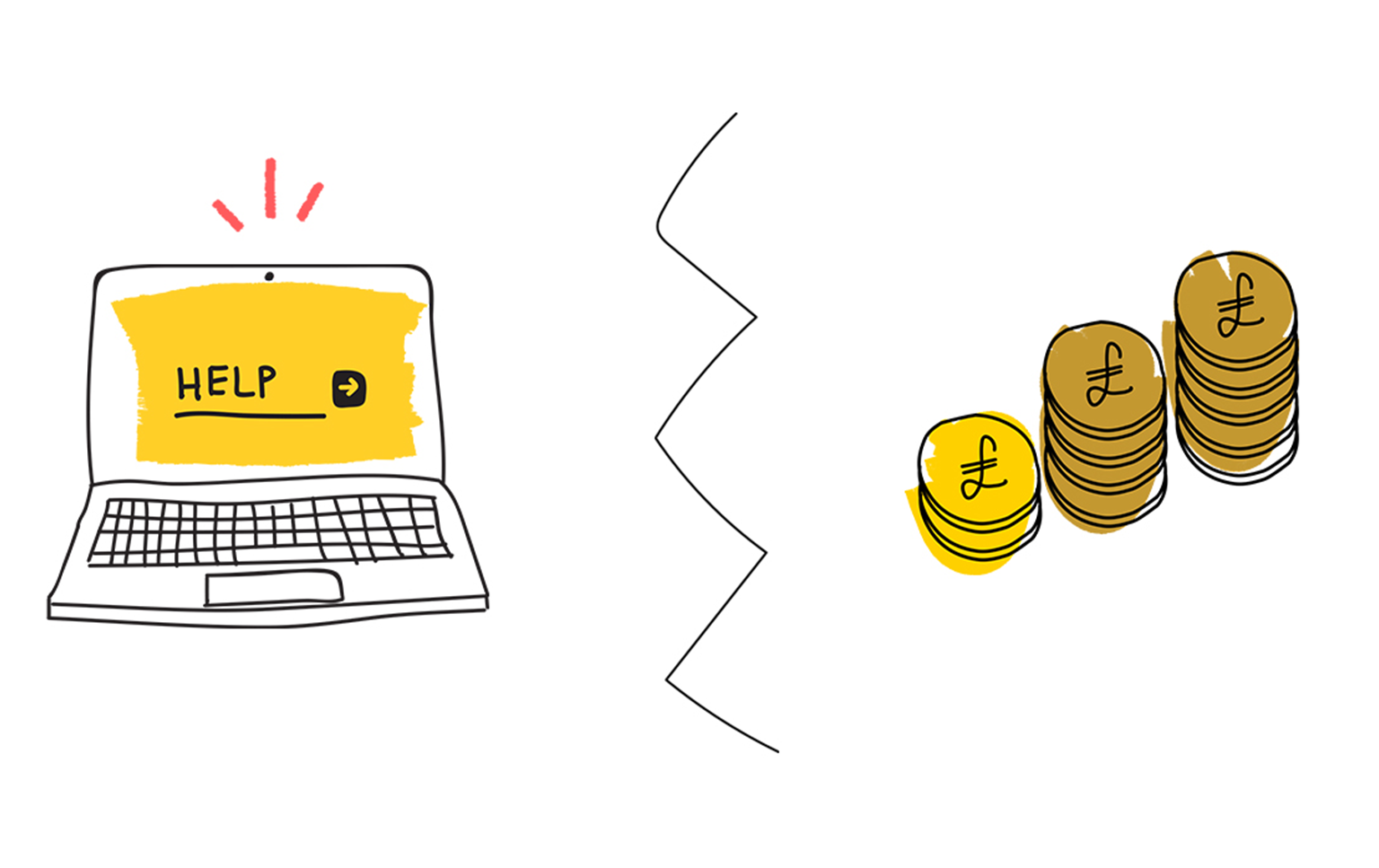 Reacting to the pandemic, governments have provided access to financial support through online application forms; this is, of course, a great initiative.

However, in the UK there are many people without digital literacy or who struggle with limited connectivity or unmet accessibility needs. These people have been unable to access financial aid or complete basic banking needs such as monitoring account balances, depositing paychecks and paying bills.

So where are we going wrong?

It all comes down to priorities

For a long time the design industry has happily used the same(ish) evaluation framework to decide which idea to prioritise over another. It goes a little something like this…

Whilst these are all sensible questions to be asking, we’re missing a crucial question:

Will this idea allow everyone to access, use and enjoy the experience, regardless of their situation or context?

By failing to ask this question from day one, we are (intentionally or not) de-prioritising certain needs over others. We’re excluding people from the experience, often those who are vulnerable and need us the most.

We often see businesses rush to launch something before they build in accessibility functionality. Or they retrofit ill-fitting features to negate the fact that the idea excludes a proportion of the world. Yet so often these tasks are de-prioritised by teams due to competing priorities such as budget or time constraints. In the case of Apple’s emojis, for people who had been excluded for so long, it felt like too little too late.

If we want to increase the chances of inclusive ideas making it through the product funnel, we must first re-examine what our priorities are and then take action to express those priorities.

Let’s begin at the beginning

What if we said upfront we want a design for people of different abilities to fully participate?

Traditionally, the criteria we use for decision making are based on business or customer objectives, with a score applied for how highly the idea fits this criteria. As Satya Nadella, CEO of Microsoft put it: “we used to call it assistive technologies and it used to be a checklist of things you did after the product was built. Now it’s about taking this way upstream into the design process.”

Sounds sensible. But here at Idean, we’ve been thinking about a new set of questions designed to uncover how inclusive one idea is compared to another. 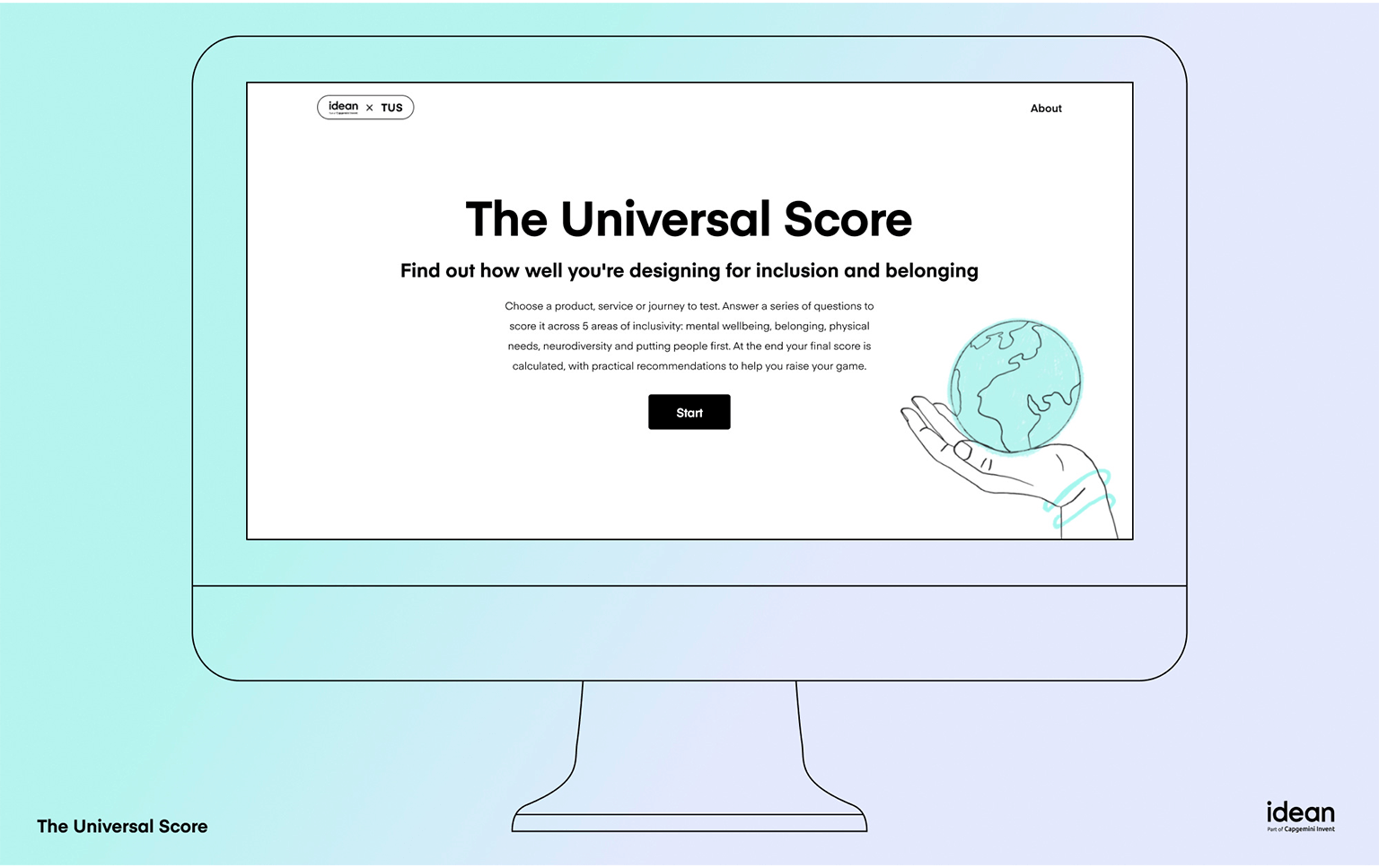 The Universal Score is an inclusive evaluation tool that poses a whole new set of questions to help us evaluate our ideas against a more inclusive criteria.

We believe that by asking these questions earlier on in the process, we can start to have a conversation around how inclusive one idea is compared to another.

We might disregard something altogether, or simply capture opportunities for how we can make this idea more inclusive in the next round of iterations. Either way, we increase the likelihood of an inclusive idea coming to fruition.

And if the ethical benefits of inclusive design aren’t enough to convince your stakeholders to adopt this tool? Think about how much time and effort (£££) you’ll save from not having to build in functionality at the last minute, not to mention the additional customers you’ll acquire (more £££!) by designing a product that works for everyone.

The Extra Costs Commission found that businesses who fail to meet the needs of disabled people alone, could be turning away a share of £420 million in business each week.

What’s the key to prioritisation success?

Thinking about inclusivity early on is super important. But that alone isn’t enough to increase the chances of inclusive ideas making it through the product funnel. We must embed inclusive design into every part of the product process, from discovery right through to delivery.

And to truly set ourselves up for success, we must also think about the success metrics themselves.

Typically we track and measure product performance against acquisition, retention and engagement metrics. For example, does this new feature increase the number of weekly engaged users?

But how can we expect teams to prioritise inclusivity if success is defined by acquisition or engagement, not how inclusive the experience is for our customers?

What if as well as engagement or retention, we also measured whether our users felt an increase in their sense of belonging regardless of physical ability, cognitive ability, and social context?

Perhaps then our customer feedback surveys would look more like this…

Inclusivity should be the default from day one

Thinking inclusively isn’t enough. Teams need the right tools and frameworks available to help them at every part of the process. And that’s where The Universal Score comes in.

By redefining what success looks like, we can increase the likelihood of inclusive ideas making it through the product funnel. Or in Apple’s case, the likelihood of a transgender flag being there from day one.

The Universal Score is live now and free to use. Try it out!