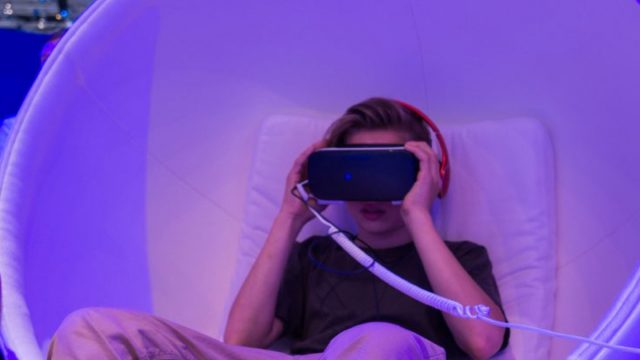 IFA, Europe’s largest consumer electronics showcase, can be an overwhelming experience for novices. But for frog’s designers, it’s an opportunity to scout the latest trends and test the market’s hottest consumer products.
BY TODD TAYLOR, MATHIAS MOUCHARD & PETER DIJKGRAAF — FROG

For the first time at IFA, virtual and augmented reality (VR/AR) felt ready to move from the lab to the living room. Millions of gamers spent this past summer navigating the real world in pursuit of imaginary monsters with Pokémon Go. Its success provides us with some convincing evidence that, with the right content, AR can find a mass audience. This makes the release of Lenovo’s Phab 2 Pro smartphone a timely one.

Lenovo’s Phab 2 Pro is the first handset enabled with Tango, Google’s augmented reality application platform. The new capabilities represent a next step for true smartphone based AR. And if the consumer trend spills over, Tango-enabled smartphones with industry-specific applications could also help workers collect and access information in exciting new ways.

Additionally, the imminent release of Sony’s PlayStation VR is poised to bring virtual reality to a mass audience through their proven content platform, at a price (€399) that will make VR widely accessible. Sony’s competitors may silently hope for a successful PlayStation VR launch: a hit may signal a tipping point in the VR market, opening up opportunities for a world of virtual products, content and experiences, both in the gaming space and numerous other domains.

“The PS VR is very comfortable, easy-to-use, high-end VR headset ready to hit the market. You don’t need an expensive computer, just plug it into your PS4. It will ship with quite a few games and I’m convinced the content will keep coming. This is a consumer-ready VR headset.”

Will “Smart” Find A Home?

Despite being one of the most hyped IFA trends for several years running, the smart home category continues to show modest rates of adoption. Even Nest, bought two years ago by Google for a hefty $3.2 billion, is widely reported to be underperforming expectations. Although the category is yet to really catch fire, an enormous range of smart home offerings competed for attention at IFA.

The smart refrigerator is one of the latest appliances to go online. Most of the offerings resemble an enormous mobile phone embedded in a fridge door. Internal cameras are also popular, allowing the user to check out the action from inside their fridge directly from their smartphone. LG’s offering even runs Windows 10, including Cortina – and it is translucent so that you can see through the screen into the refrigerator.

If smart fridges gain acceptance, we may discover a world of exciting things happening in and on our refrigerators. However, it’s likely that the smart fridge will need some more time to find its way into homes, where every member of the family already carries the internet directly in their pocket.

“A small niche of people are tripping out about how awesome smart home tech is. Everyone else is still wondering what the fuss is about. The tipping point will only arrive once smart home technology becomes both easier and more useful for ordinary people.”

There were more wearable devices on display at IFA than one could really expect to be able to explore. The diversity of the offerings demonstrates the wide range of use cases and design intents that are behind new product introductions.

Samsung launched the Gear 3 and it’s jammed with as many features as they could fit into its very robust frame, including fitness, notifications, payment, calls and GPS. Nokia’s Withings Steel HR also launched at IFA, but emphasizes minimalistic style with a few smart features. Health tracking is reported on your smartphone and alerts are displayed on a small screen embedded within an otherwise analog watch. Fitbit’s Flex 2 activity tracker embeds a small removable sensor inside a thin, flexible band. Five LED lights are the only on-device display and accessories such as gold and silver bangles and necklaces target a use case at the opposite ends of the spectrum relative to the Gear 3.

“Telling time is a killer use case. Whether mobile payment or fitness tracking can achieve that status is yet to be seen. This is a fun time to observe how users react to the balance of form, function and emotion.”

Unless you are a journalist or an avid brand fan, you probably missed the press announcements from the first days at IFA. If you did watch, you may have noticed a familiar theme shaping the on-stage narrative for all the major brands: the claim to design as a core value. David Lowes, CMO of Samsung Europe, opened their press event by emphasizing that Samsung is not just a technology company, but a “technology and design company” while standing against a backdrop reading “improving lives with technology.”

The tone set by Samsung and others signal a broader understanding of the importance of good design and a desire to project design as a core value. What was formerly seen by many as a shiny wrapper placed over a new technology is now understood to be a driver of innovation, a competitive differentiator and ultimately a stimulator of business performance. How deeply enormous organizations like Samsung can truly integrate a value for design and all that it implies is still to be seen. However, it is clear that there is a very high awareness of design’s transformational influence among those leading the conversation within the customer electronics industry.

Graduated with two Master’s degree in Interaction Design and VR/AR, Mathias firstly focused on web and mobile interfaces. He then specialized in emergent technologies to create unique experiences.

Peter is a digital problem solver from the Netherlands. He approaches design with feasibility in mind due to his tech-native development background. It’s important for him to keep learning by staying curious and out of his comfort zone.

Todd is responsible for marketing in Europe, the Middle East and Africa. He hails from a foggy island in the North Atlantic, but has called Munich home for more than a decade.